Watch the Latest Video for 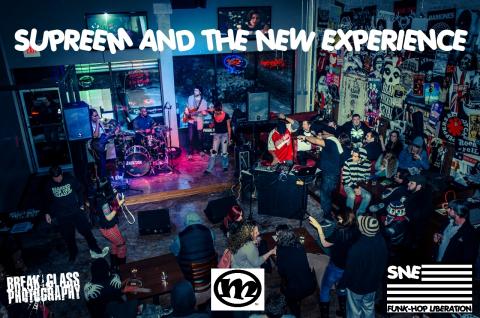 “The Philly music scene is on a good vibe right now,” said Supreem, lead singer of the Indie band Supreem and the New Experience. “It’s very diverse and the serious bands are supporting and sticking up for each other. There are a lot of open mics where artists and musicians can come together and make beautiful music. This used to be the land of the crab in the barrel, but I’m not seeing too much of that these days. The venues are very open to local bands performing and everybody’s fans are uniting to do some pretty big events.”

Supreem grew up a hip hop fanatic, influenced by many well-known artists of the genre, Big Daddy Kane, Run-DMC, LL Cool J, Public Enemy, EPMD, Das Efx and Wu-Tang. “I was also a big follower and supporter of my hometown Philly’s hip hop being played by Lady B. on the radio like Schoolly D., MC Breeze and Jazzy Jeff and Fresh Prince,” said Supreem. “I always loved Michael Jackson, George Clinton and James Brown; my uncle opened me up to all kinds of funk. My mentor and producer, Docta Shock, schooled me on making music and showed me that my favorite rappers were using funk grooves from the 60’s and 70’s to make the music that I loved so much.”
Supreem And The New Experience "Gotta Look Up"
Supreem And The New Experience "Gotta Look Up"

He admires many classic soul, funk and hip hop artists for not only their timeless music, but for their live performances as well. “First and foremost, The Godfather of Soul James Brown, George Clinton and The P-Funk All Stars, Public Enemy, Run-DMC and Busta Rhymes,” said Supreem. “They all give 110% when they hit the stage and give performances like it’s the last time they will ever perform again in life. I never saw James Brown live but I’ve seen plenty of footage of his live shows and he was electric. The energy that these guys give and get back from the crowd is amazing. I respect a good show and my own has to be over the top like the entertainers that I admire.”

Supreem and the New Experience create the kind of music that pays homage to the classic music of their roots with a fresh new sound and a live show that can’t help but be noticed. “We are bringing back the real funk and hip hop that’s been missing from music for so long, and a stage show that is unrivaled by anyone, signed or unsigned,” said Supreem. “[We have] a real DJ, DJ Xzotixc D, cutting with records and a horn section, just bringing real music back.”

He wants fans of his music to not only enjoy the music but to grasp the meaning. “See, my music is like life, you gotta look up to get down,” said Supreem. “We need to be thankful for what we got and have faith for what we want and in the meantime work hard so we can play hard too until our goals are met. Nobody can party all the time or be angry all the time. We have to take the good with the bad and do things in moderation and use wisdom to ensure a long, good life. That's what I want people to get out of my music. We play and work hard to make sure you have a great time listening or at a live show.”

The best music advice he’s gotten, is advice that would be good for other performers to heed. “Handle your business by doing real business and be a boss,” said Supreem. “Own whatever you can own for as long as you can and try not to be just an artist. I’ve got an LLC for my band so I can operate as a band as well as an entertainment company. We are bringing up new acts under us, like my guitar player’s band Paulette Branson and Mixed People. The first project is SNE presents The Concoction: Bringing A New Experience to Funk and Hip Hop. You got to get your paperwork taken care of and have a good lawyer. That advice has been given to me for years from Docta Shock to my current producer, Grammy nominated producer David Ivory.”

Supreem and the New Experience is a relatively new band, but they have an EP out, “Pimpilicious,” and have released two video/singles from it, “That Funk” and “Gotta Look Up.” The singles are available on iTunes, but the EP is only available at live shows. After the band releases their third and final single/video, “Goodly DI Remix,” the full EP will then become available on iTunes. The band is currently writing for their next CD.

Music fans can check out the Indie band on their official site, Facebook, Reverbnation and Twitter. Supreem and the New Experience are gearing up for a summer tour. Their next show is March 17 at the World Cafe Live in Philadelphia.